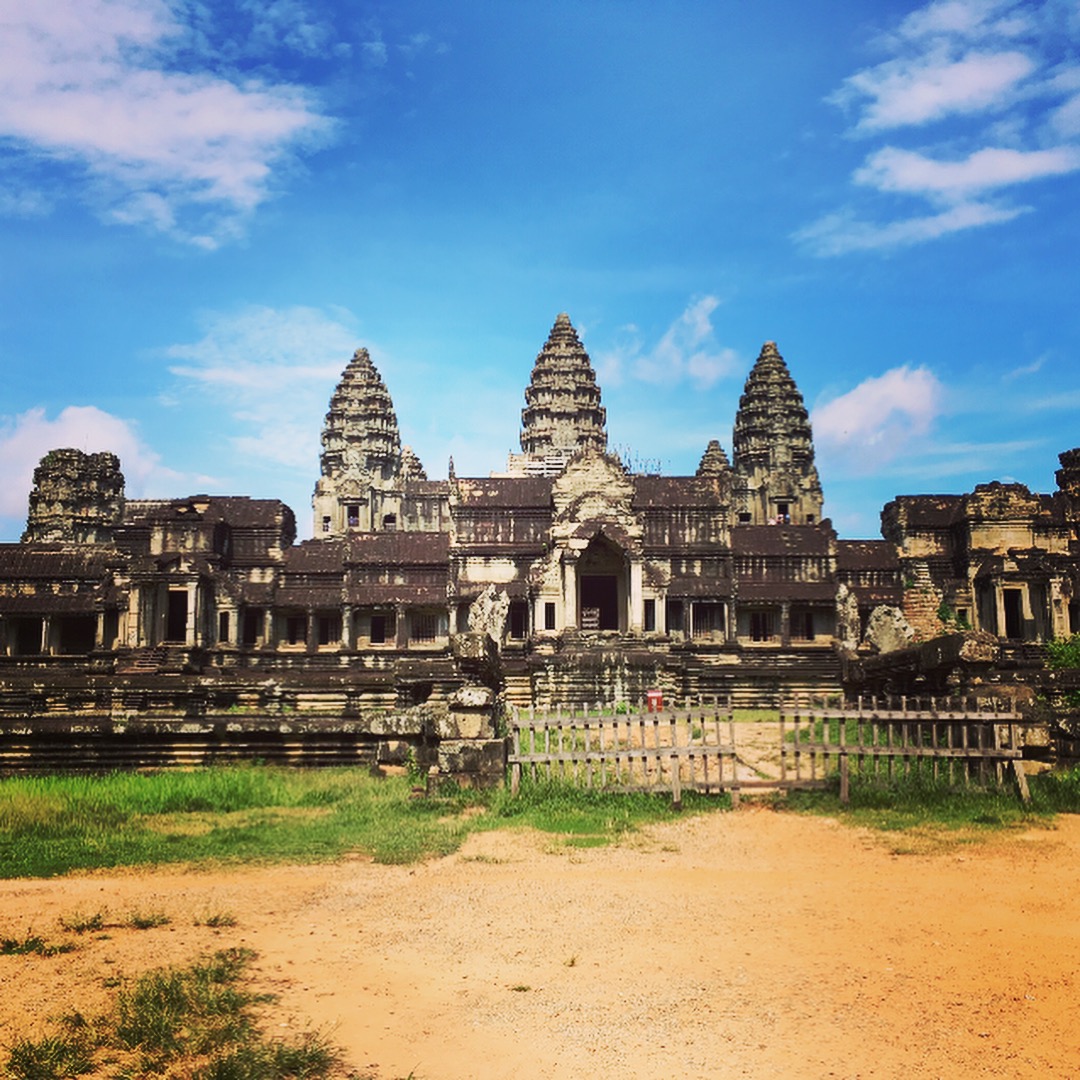 In the 28 years and 11 months of my life, I have spent less than 24 hours in Cambodia. Still, that was sufficient for me to definitively call it one of my favorite places in the world. From the friendly people to the beautiful landscapes, to the rich (though sometimes sad and terrifying) history, Cambodia is one of the best countries to visit, and I cannot wait to return.

My trip to Cambodia centered around Siem Reap, the city closest to the Angkor temple complex. Upon exiting Siem Reap’s airport, my friend Sarah and I were greeted by David, an employee of the hotel we were staying at, with a big smile and a sign with our name on it. David took us to our transportation – a personal motorized tuk tuk – helped us secure our belongings, and then got on board with us and handed out cold Cambodian beer.

Once we arrived at our hotel, the Khmer Mansion Boutique Hotel, the incredible service and amenities continued and the staff went above and beyond to care for us, even though we were only staying for one night. It may have helped that (as far as we could tell) we were the only guests there at the time, but I cannot speak highly enough of the place, especially for less than $50 per night. For example, when we first arrived Sarah and I were given welcome refreshments, and then found our names laid out in flowers on our beds in the room. David was identified as our personal assistant during our stay, and though we did not ask much of him, he was always available when we called. 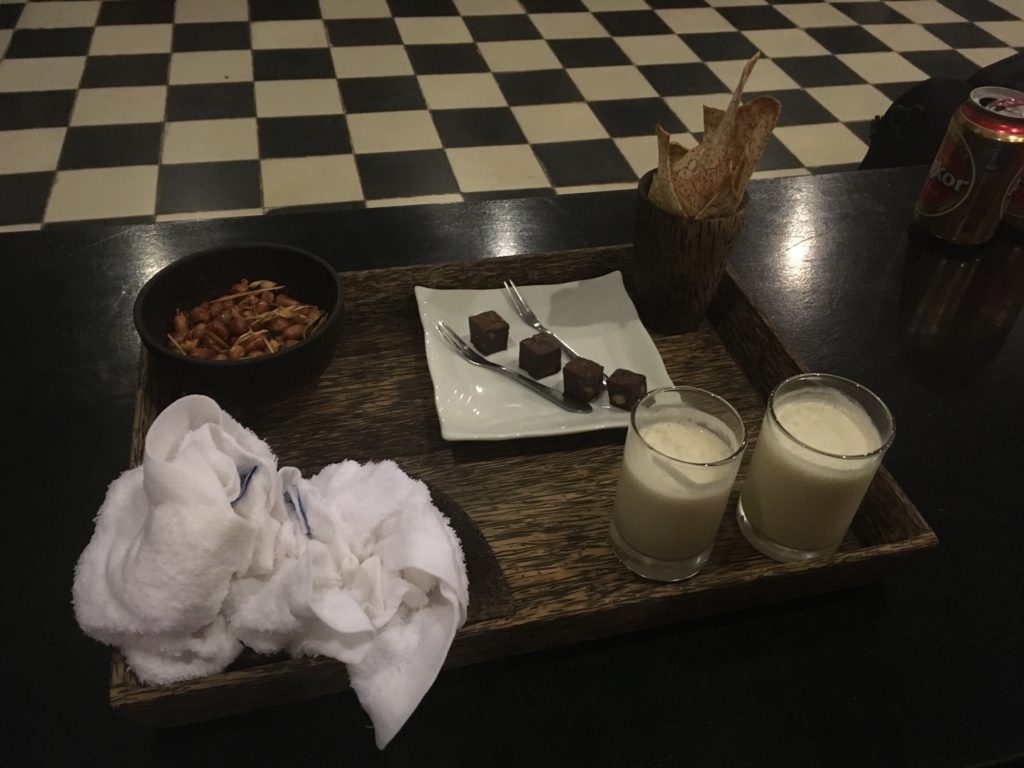 Welcome snacks and drinks to enjoy upon arrival at our hotel 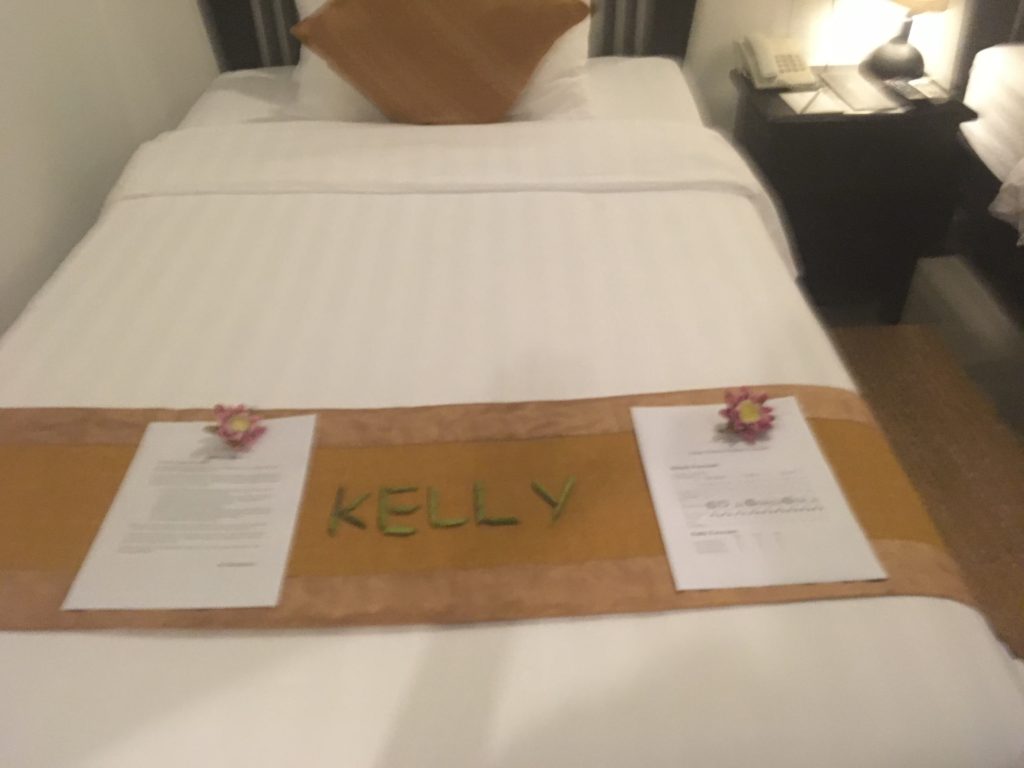 My name in bamboo sticks with flowers on my bed 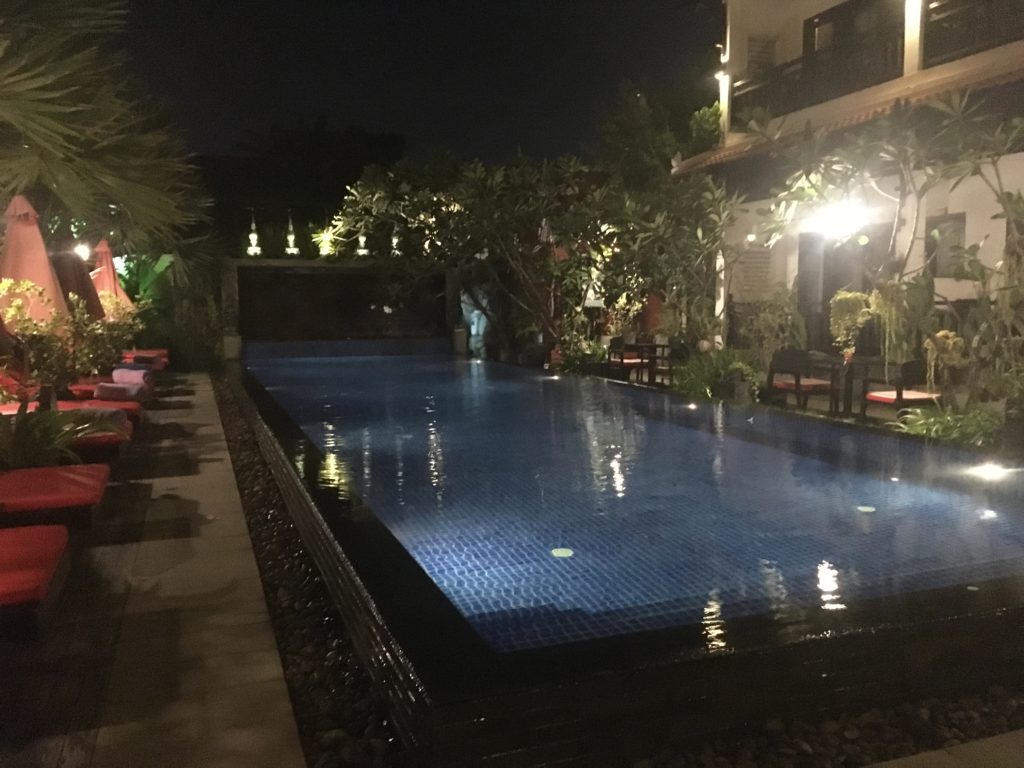 Seeing as we only had one night to enjoy the city and we had to be up at 4 AM the next morning for a sunrise tour of Angkor Wat, we grabbed a quick happy hour drink by the pool and then set out to find some dinner before bed.

Siem Reap is a small “city” in a less-developed country, but it has a bustling night life! Most of the activity happens on Pub Street and in the Night Market, both of which were walking distance from our hotel. Because of the tropical climate, all the bars, clubs, and restaurants are open-air, with a few stand-alone locations in the middle of the street, like this bar on wheels. 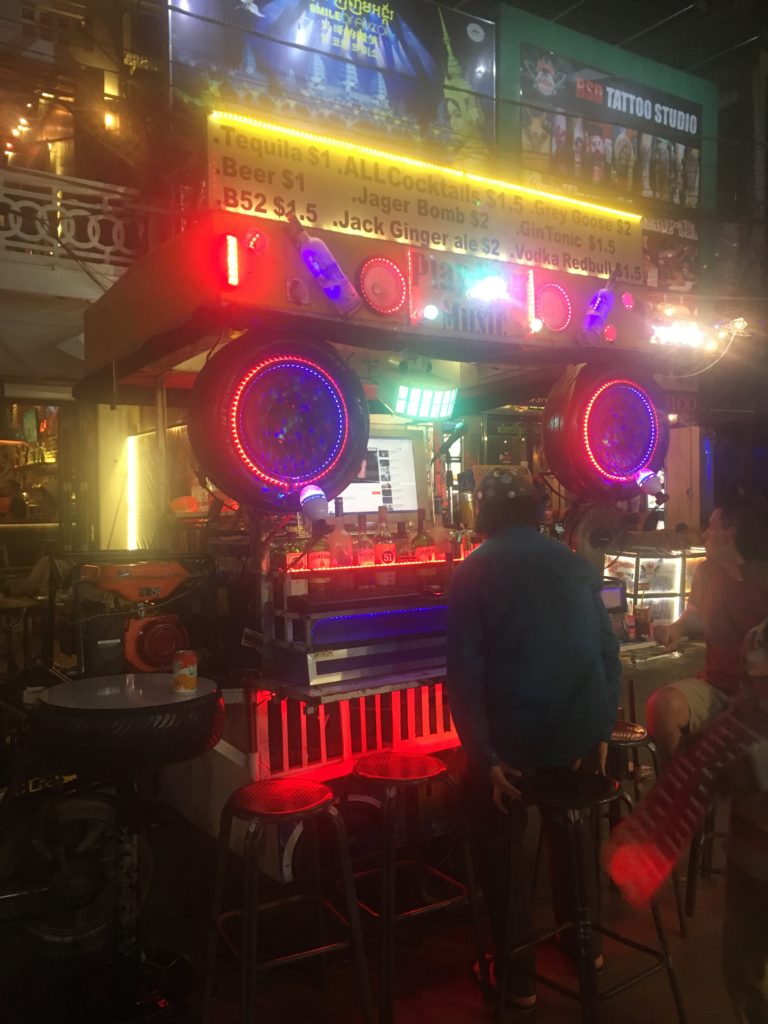 We found a nice restaurant to eat dinner at on Pub Street and then wandered through the Night Market and back to our hotel before calling it a night. While we did not do any shopping that night, we did take a quick break for a foot massage and fish pedicure! The fish actually eat the dead skin off your feet for a few minutes, leaving them feeling very smooth afterwards. The experience is as strange as it looks. Be warned if you have a fish pedicure yourself that it tickles: I spent most of the time with the fish laughing out loud, both from the tickling and at the absurdity of what I was doing! 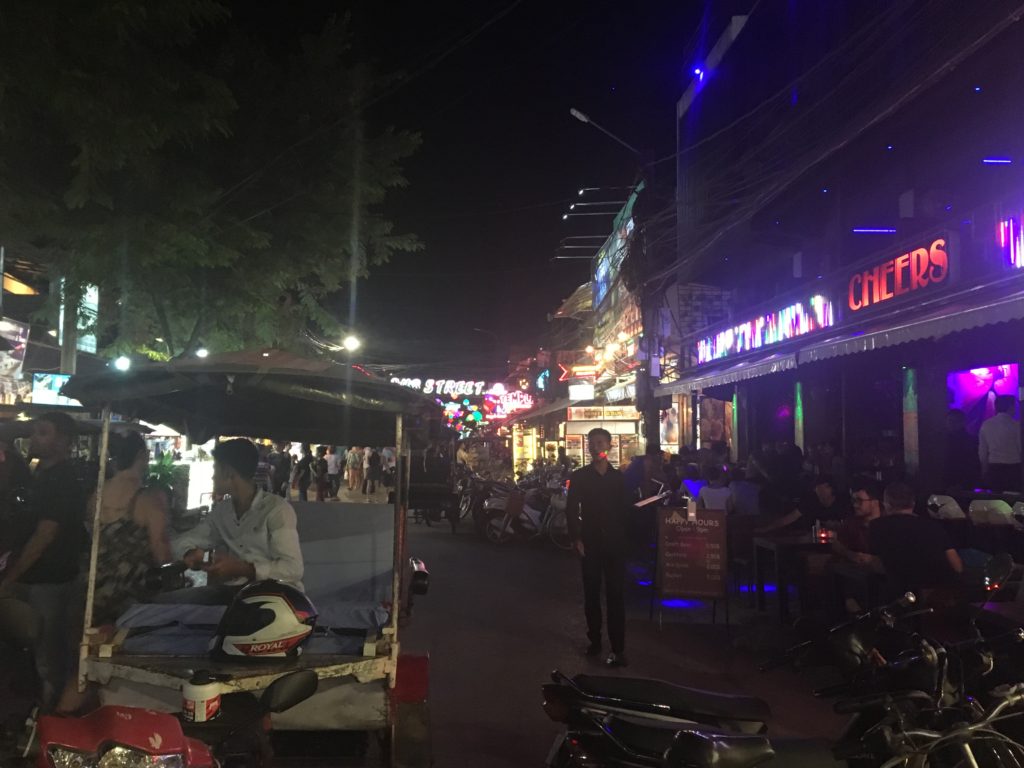 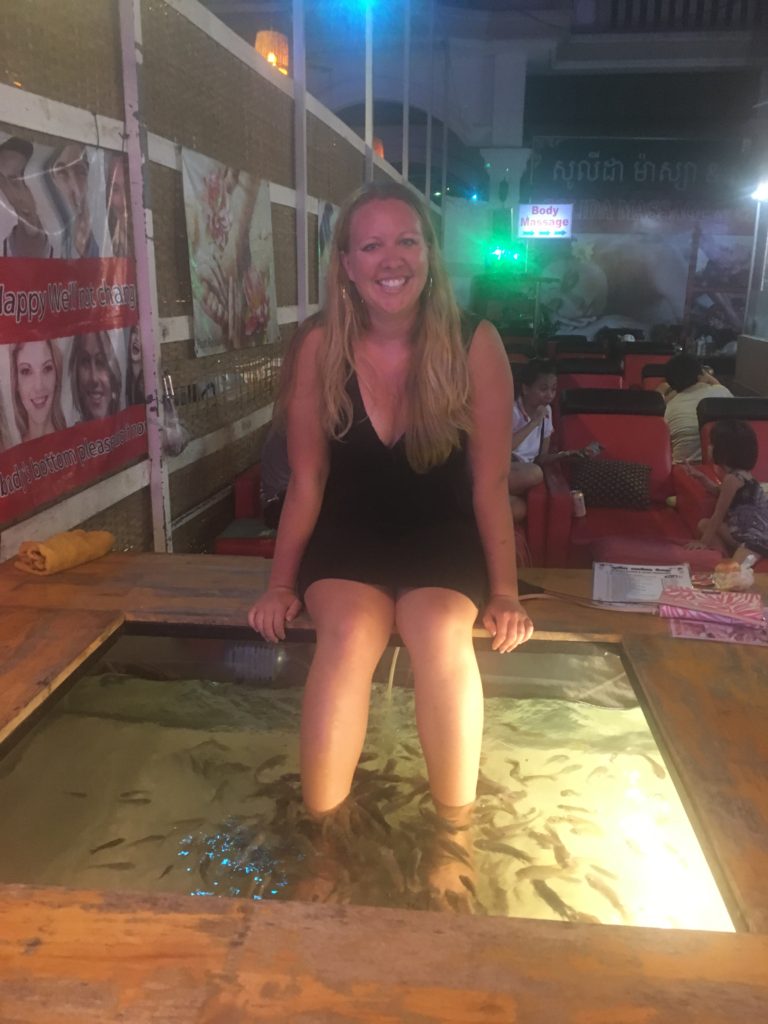 Here I am getting a fish pedicure!

The next morning we woke up at 4 AM to meet our tour guide for Angkor Wat . You’ve no doubt seen photos of the Angkor temples before, likely at least Angkor Wat; perhaps you learned about the temples from watching Angelina Jolie in the movie Tomb Raider, which was filmed on-site in Cambodia. However, as with many wonders in the world, photos and videos do not do this area justice. First of all, the Angkor complex covers over 400 acres, so it is incorrect to think of it as just one temple. Second, the temples are awe-inspiring in person in a way that cannot be conveyed through photos. Finally, being able to actually touch, climb, and walk around in the temples is an experience that could never be brought to life with a picture. I spent the entire day being enraptured by the temples we explored, each so different from the others and yet connected through their stories and history, both ancient and modern. 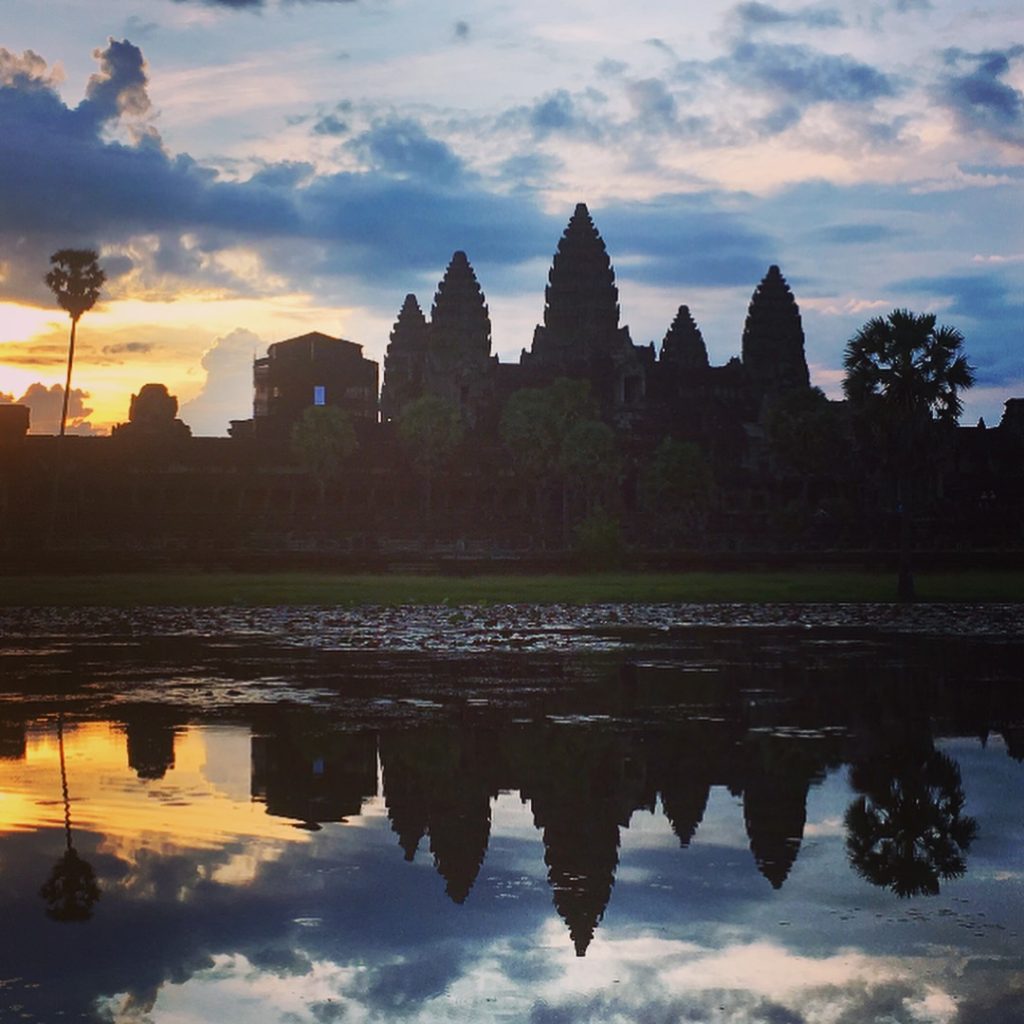 The Angkor temples were created as part of the capital city of the Khmer Empire beginning in the 9th century AD. Influences from many different religions can be seen within the temples thanks to their transferred ownership over many centuries. The main religions seen in the architecture are Buddhism and Hinduism. 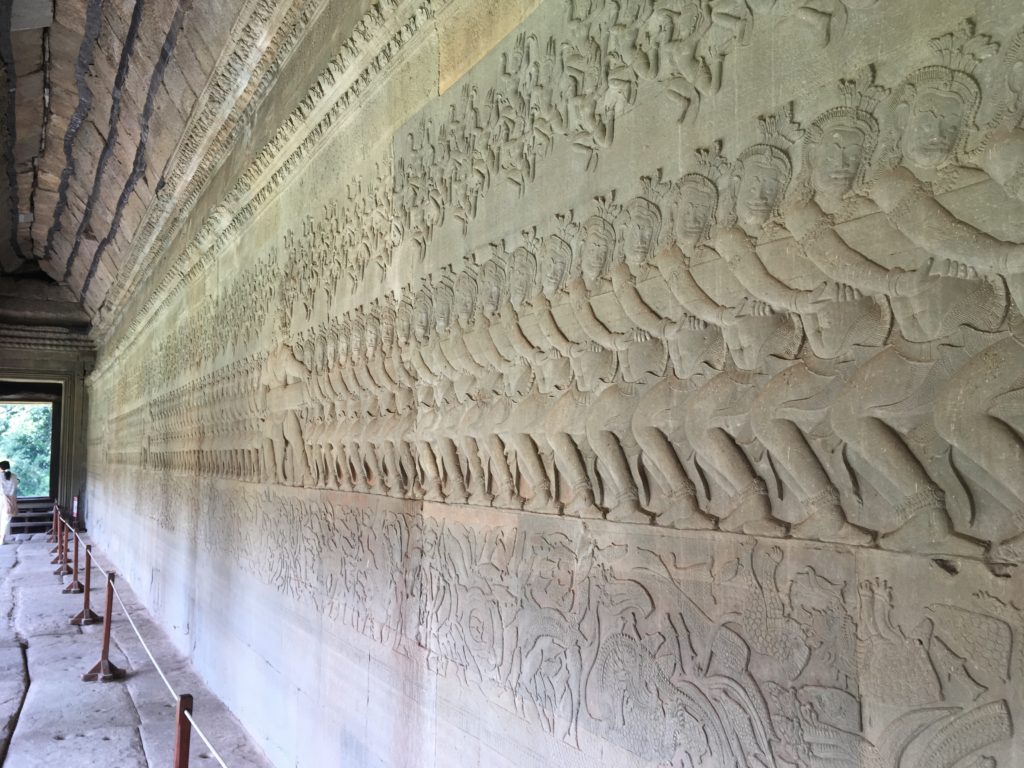 Hindu carvings on the walls 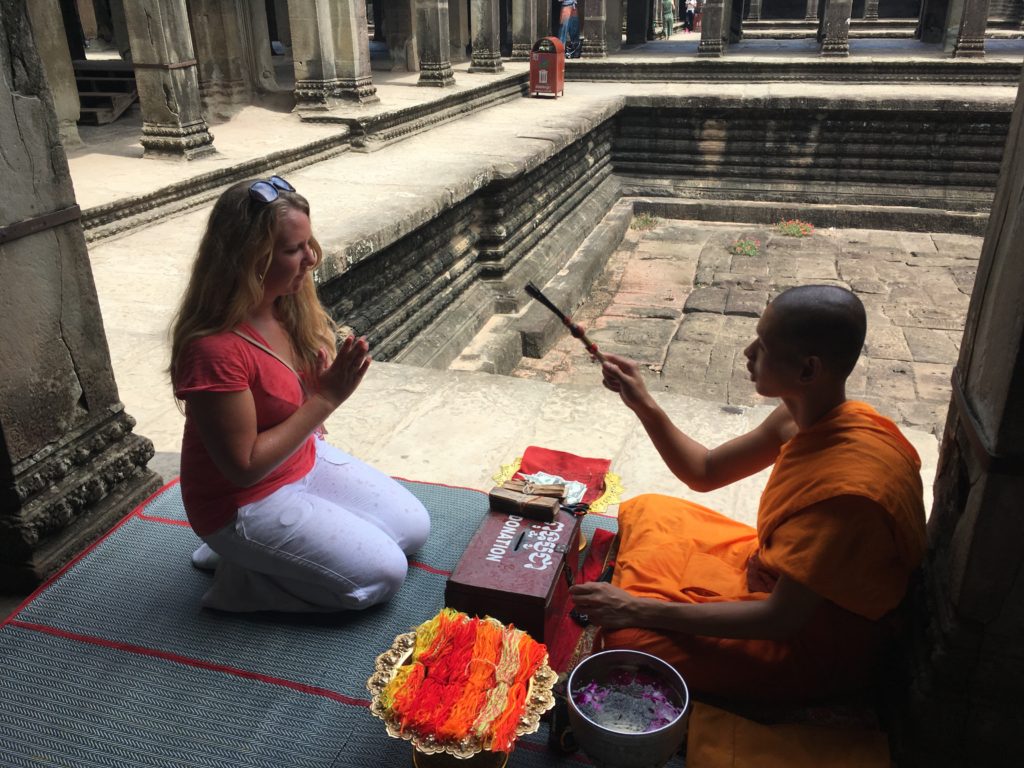 In the 1970s, the Khmer Rouge took over Angkor Wat as offices and living quarters as they carried out a genocide across Cambodia. Our tour guide told us a heartbreaking story about how his parents were killed by the Khmer Rouge when he was seven because they were educated (a lawyer and a doctor). Our guide was forced to collect elephant dung from the fields during the Khmer Rouge’s reign, and did not go to school again until he was 16 years old. The fact that he was fluent in English was unbelievable after learning this, but even more unbelievable was how he told this story so matter-of-factly after pointing out some Khmer Rouge bullet holes in the side of Angkor Wat. The country has put itself back together the best it could after the genocide, but signs of pain are still all around even forty years later, from the warning signs for landmines to the jewelry made from bullet casings found in the fields.

The rich history of the Angkor temple complex, along with the unparalleled beauty of the area, makes for an amazing day.

Here are some things to keep in mind if you take the trip yourself to see Angkor Wat and the other temples: 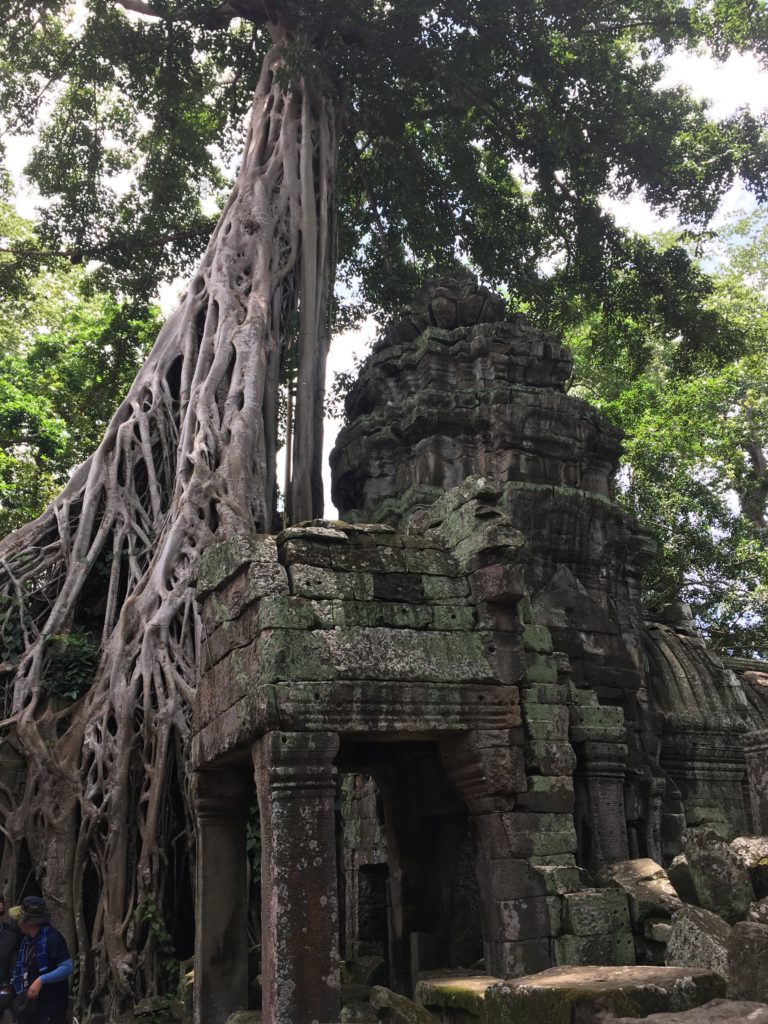 Trees growing into the stone at Ta Prohm, prominently featured in the Tomb Raider movie. 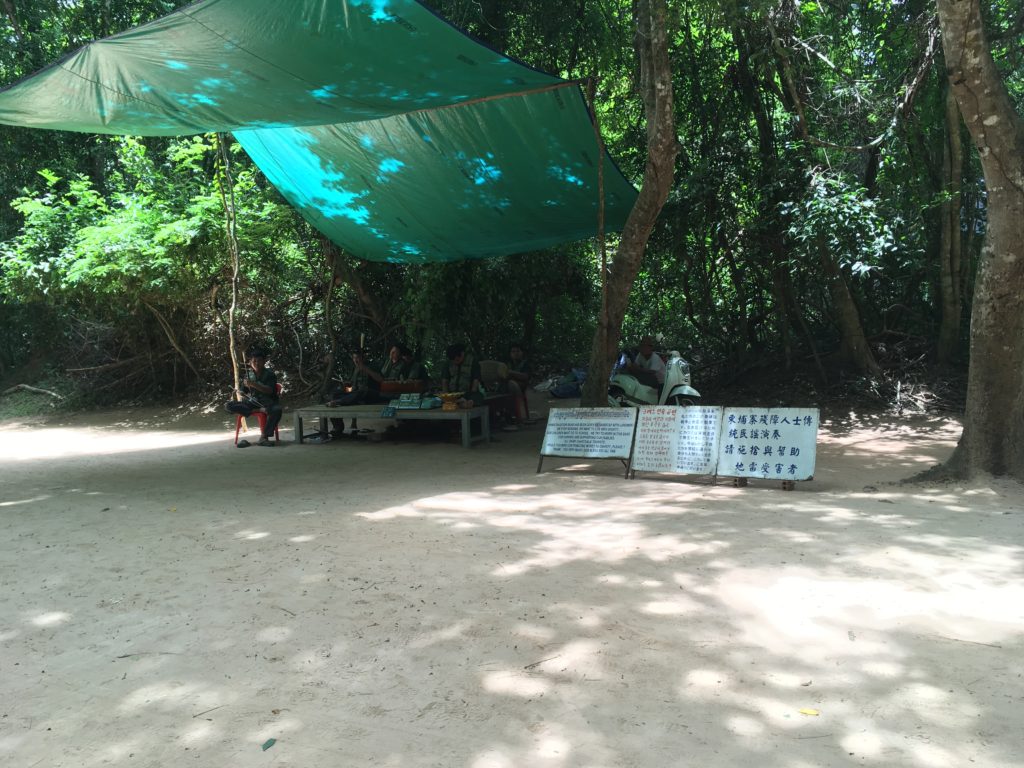 Landmine victims playing music for donations on the Angkor complex paths: one of the few methods they have for supporting themselves and making money as amputees in Cambodia 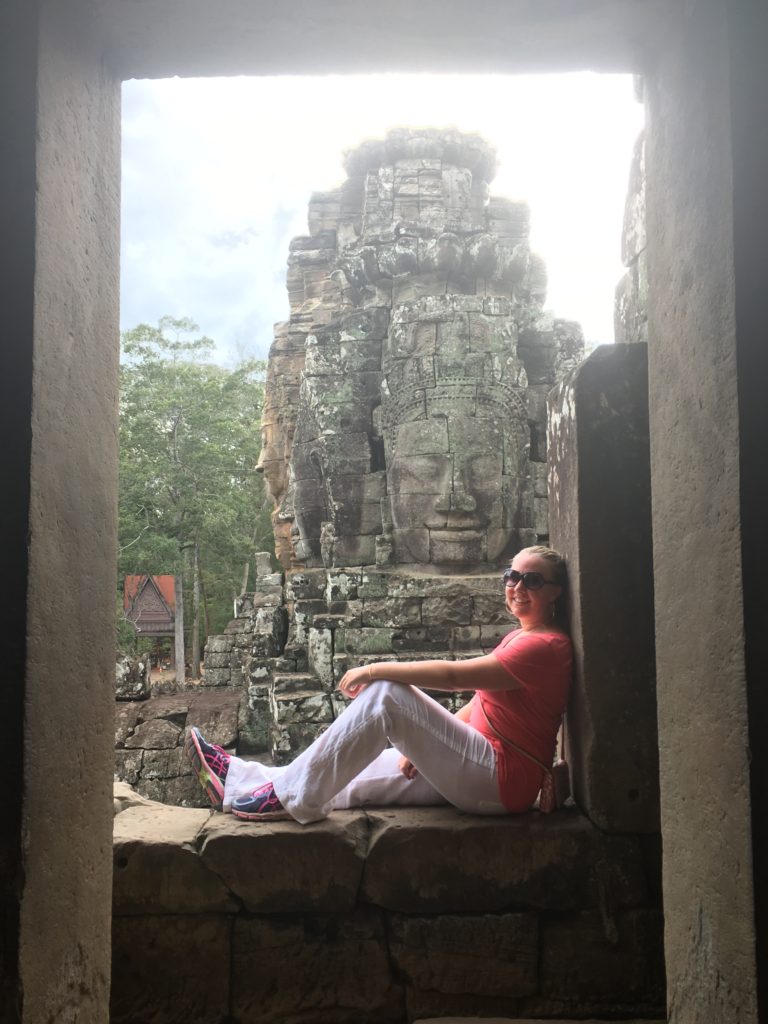 Just hanging out with the faces in the Angkor Thom complex 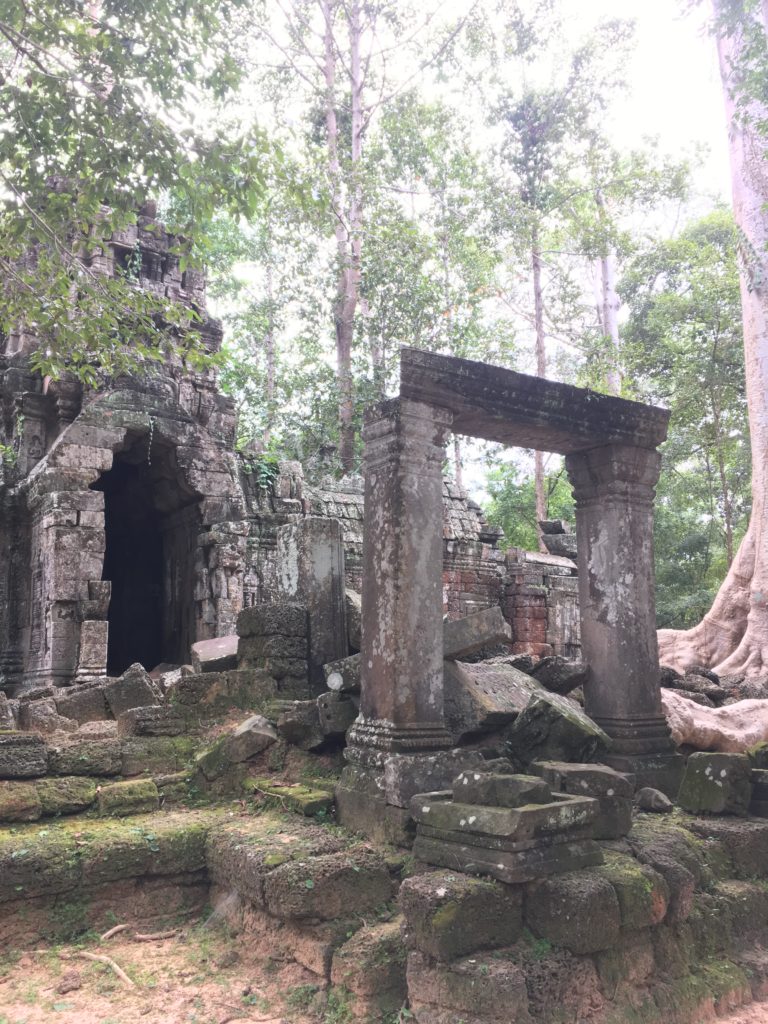 Ta Nei temple, one of the remote temples our guides took us to where we were the only people exploring the grounds at the time 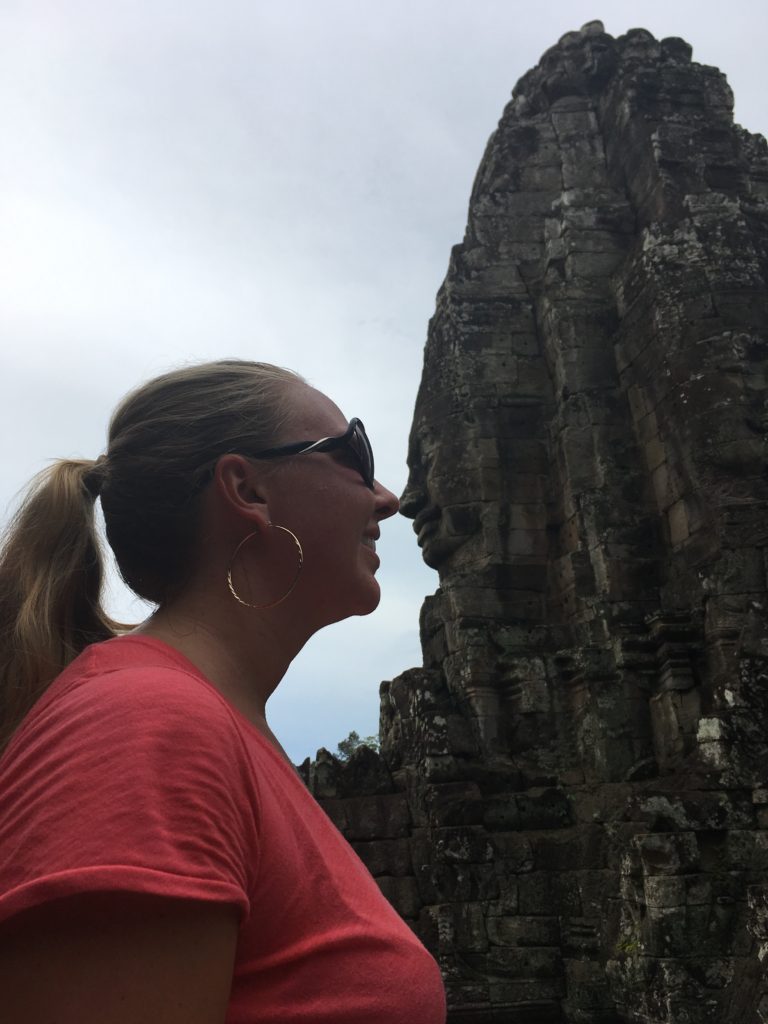 Nose to nose with one of the Angkor Thom faces 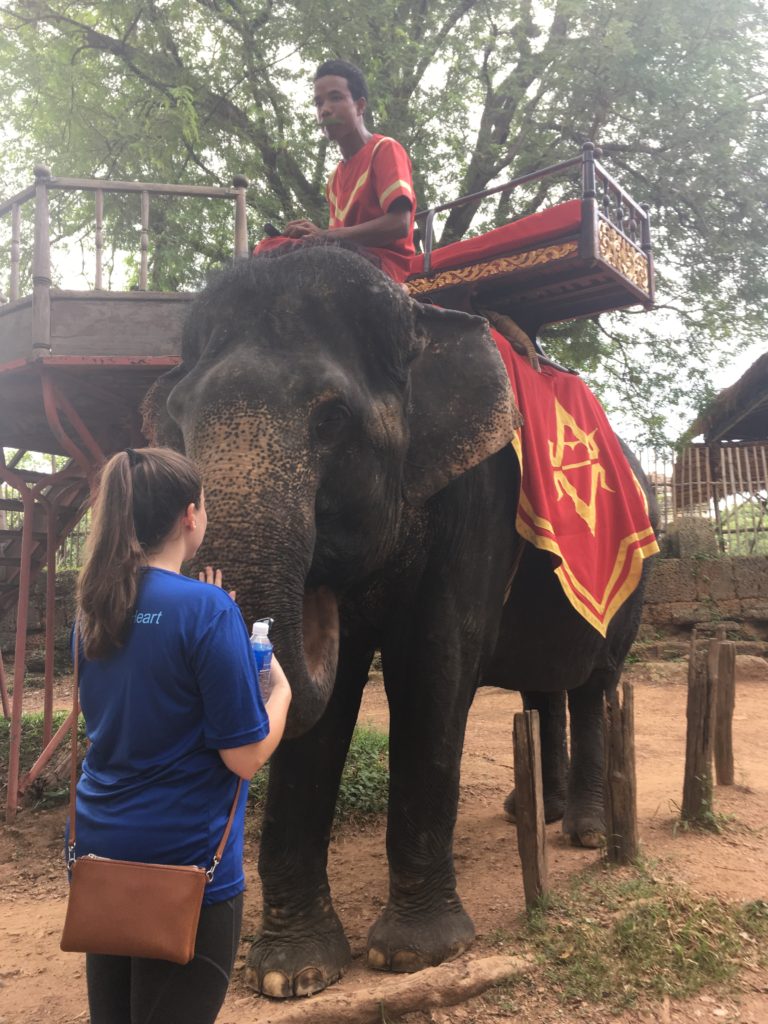 The only benefit to hiking up the hill for sunset: meeting (but not riding) an elephant on our way down

Here is a link to the tour company we booked through: Happy Angkor Tour. At this time I receive no compensation for you booking through this tour group, just the satisfaction of helping you on your travels and directing customers to a survivor of a devastating genocide.

After visiting Cambodia, I wanted to learn even more about its recent history and the Khmer Rouge genocide because the effects were clearly so raw with the Cambodian people. I recently read First They Killed My Father: A Daughter of Cambodia Remembers (P.S.)

by Loung Ung, a survivor of the genocide: if you want to learn more about this period of Cambodia’s history I highly recommend this well-written and well-thought-out book. 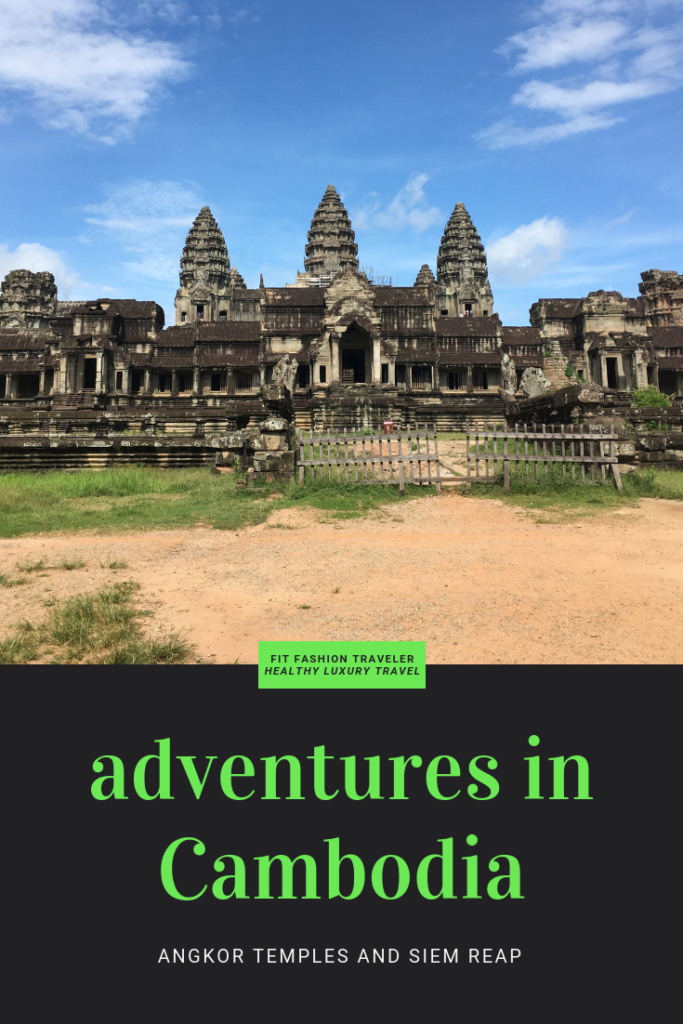