I met French President Nicholas Sarkozy in Nice, France, in May 2010.

For the final weekend of my semester abroad, I took a short trip to the French Riviera. I had not planned on meeting President Sarkozy. I did not anticipate that my final European vacation that year would bring me face-to-face with the French president. My dad and I were unaware that we would be in the same city as Sarkozy. We did not have any intention of attempting to meet him. Nevertheless, as the city of Nice got ready to celebrate its 150th anniversary of uniting with France we found ourselves shaking hands with President Sarkozy himself.

Want to read about another one of my crazy adventures? Click here to learn about The Time I Tried to Go to Nicaragua!

A Weekend in the French Riviera

I studied abroad in Strasbourg, France, in the Spring of 2010. At the end of the term I had about a week of free time before flying back to the States. My dad flew over to France to help me carry back the extra items that I had picked up during my semester. Because of his help, he got to pick the destination of my final vacation. Though I had already been to the French Riviera twice that year, my dad really wanted to return to Nice, France, so we flew down for one last weekend.

The weekend began in downtown Nice. We rented bikes and rode along the shoreline on the Promenade des Anglais. It was a beautiful beach day, but the beaches in Nice are made of small rocks rather than sand! I tried to lay out in the sun, but it was too uncomfortable having just a towel between me and the rocks.

For dinner, my dad and I found the best outdoor restaurant area I've ever been to. Tucked away in the Old Town on Place Charles Félix were dozens of outdoor seating venues. Awnings, tables, and chairs available for patrons to sit at once they had selected their restaurant for the evening lined the pedestrian road. The menus all looked so good; we knew we wouldn't go wrong whichever place we picked. The fresh seafood from the Mediterranean Sea and  produce from the fields of Provence did not disappoint.

During this trip to the French Riviera, I was determined to visit Nice's neighboring city Cannes for the first time. The train ride down the coast took less than an hour. We saw gorgeous views of the sea the entire way. Once in Cannes, the open air buses were a great way to see the city quickly. After my dad and I took our tour, we walked down a few side streets with stores offering everything from cheap souvenirs to luxury products, like tiny earrings for over 5,000 euros! We ended our excursion with a drink at a seaside resort lounge before taking the train back to Nice. 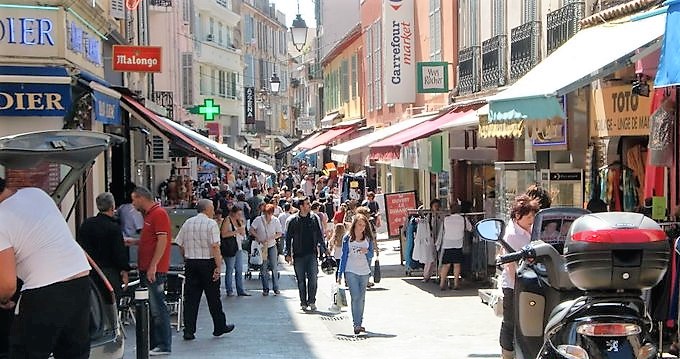 Typical side street in Cannes

In the opposite direction from Nice is the medieval city of Eze. Perched high on a hill overlooking the water, visitors can hike up to the castle and enjoy the views along the way, or take the less strenuous route to the top with public buses or taxis. My dad and I chose to hike up. Once we reached the fortress we meandered through the tiny streets that were home to the Romans, Moors, Greeks, Italians, and French over the past 4000 years (though the current fortress was built in 1388). There were many shops, restaurants, and hotels available for tourists mixed in with the houses residents still live in today.

The hike up to Eze! 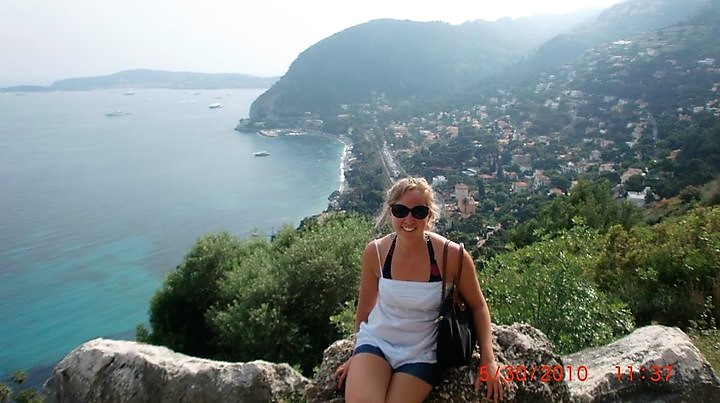 Views from a resting spot on the hike 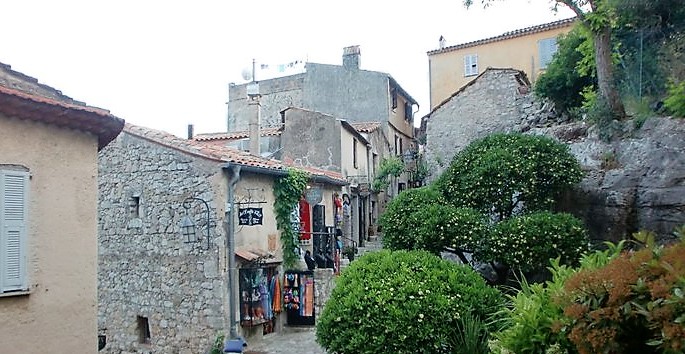 Official Happenings in the City

All weekend my dad and I noticed an excitement that had not been present on previous trips to the French Riviera. Official-looking cars drove around town with the flags of various Francophone African nations sticking out from them. We also noticed a giant structure covered in a cloth and a giant French flag in the Parc Esplanade George Pompidou that was not there before.

A few inquiries to shop owners told us the official-looking cars held African leaders attending the 25th Africa-France Summit that weekend. As a scholar of international studies, I hoped to see some history in action or at least a famous African president after hearing this. 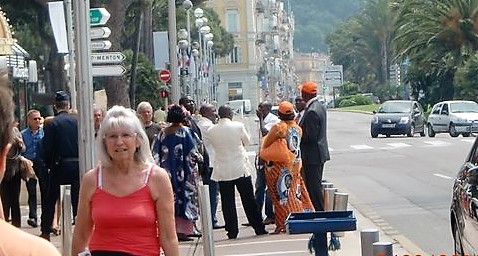 Gathering of official-looking African leaders on the Promenade des Anglais

The new structure covered in cloth was a monument constructed for the 150th anniversary of the unification of the country of Nice with the rest of France. It would be unveiled the following day. My dad and I made note of this, but had no affirmative plans to attend the unveiling ceremony. 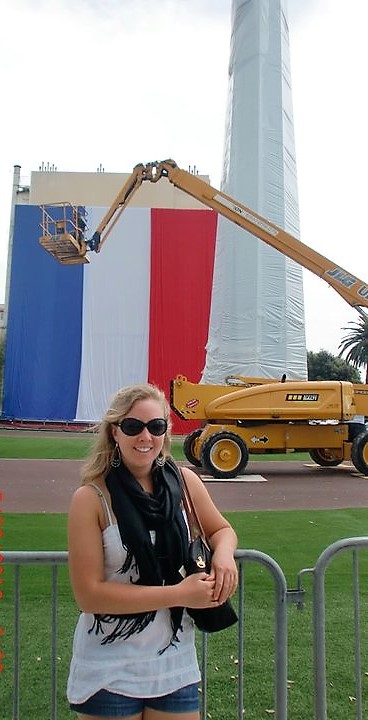 Little did I know we would be both meeting a famous president - though not an African one - and attending the unification celebration.

Preparing for the President's Arrival

Around 3:00 PM in the afternoon on May 31, 2010, my dad and I were walking along the Promenade des Anglais in search of some gelato. It was a beautiful day with many tourists in town, with all the shops and restaurants open for business. Or so we thought. As we walked, I realized that all the storefronts on the Promenade des Anglais were suddenly closing in the middle of this beautiful day.

We approached a gelato shop as the owner was wheeling his sidewalk freezer filed with ice cream inside. I asked him in French "what is going on?" and he urgently replied "Le Président!" Uncertain to what he meant, and suddenly questioning my ability to understand French, I asked "what do you mean the President?" to which he replied "Le Président vient!" ("The President is coming!"). Still confused, thinking maybe he meant one of the African presidents, I asked whether we could still get two cones of gelato.

Though the owner did not look pleased at our request, he served us two large cones of gelato. We took our ice cream cones and walked back down the Promenade. A large crowd had formed in the area by the Parc Esplanade George Pompidou.

Traffic on the promenade was halted and a large enclosed area set up on the road facing away from the Mediterranean Sea. Two policemen stood at the entrance to the area checking bags. As my dad and I approached, I handed my dad my gelato cone and opened my bag for the bag check. Seeing I had no restricted items, the police waved us through into the gated area.

We made our way up to the front of the crowd awaiting the arrival of some president. We could see the large covered structure in the park and the road in front of the structure from our vantage point in the second row. As I looked around to get a sense of what was going on and when it might begin, I noticed that everyone else around was very well dressed. Though it was a hot spring day, the women around us were wearing dresses and the men all had pants. In contrast, I had a tank top on over my bathing suit and my dad was in a t-shirt and shorts. We also were not holding the pamphlets or tickets everyone else had.

We clearly did not belong in that area. It was also clear that something important and exciting was happening, so we were not about to leave. In any event, the policemen had let us into the area despite our dress and lack of tickets. We waited in anticipation for whatever was going to happen next. 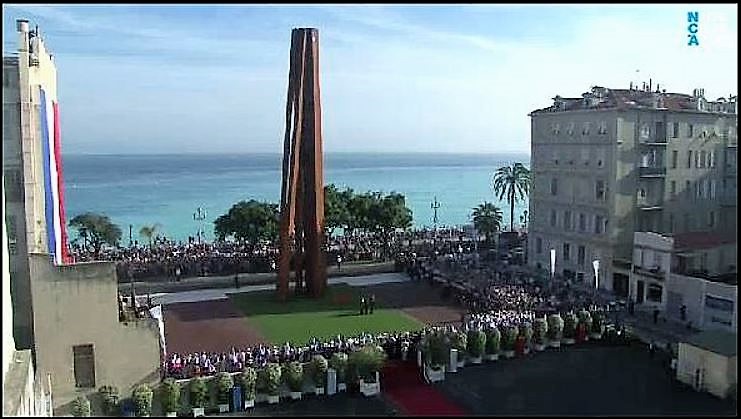 We waited a while before anything happened. After about 30 minutes of standing around an official-looking car drove down the Promenade des Anglais. It stopped right in front of us and a few French ministers got out, including then-Minister of Finance and current head of the International Monetary Fund Christine Lagarde! The officials walked towards the crowd right where we were standing. They shook hands and took pictures with the attendees in our area! I used my best French accent to say Bonjour to Christine Lagarde as I shook her hand, for fear of being found out and ejected before the event began.

A few more cars arrived with French officials who also greeted the crowds upon their arrivals. About fifteen minutes later, an even nicer car drove down the Promenade des Anglais with a large police escort around it. The crowd roared. The anticipation for the guest was high. The car stopped right in front of where I was standing, and out stepped President Nicholas Sarkozy!

As the other officials had done, President Sarkozy came over to the crowd in the gated area, walking directly towards my dad and me. I scrambled forward to shake his hand. Though he will never know my name, who I am, or even that I had been there, I was still very excited for my first meeting with a foreign leader. In my haste to get through the crowd to the front row I got some beautiful pictures of the trees in front of us instead of the President himself. I will never forget this memory.

When Sarkozy joined the celebration, the French national anthem played and the local children's choir sang. Local dance troupes performed traditional dances. A few prominent officials, including the Mayor of Nice, gave speeches. Finally, the cloth was removed from the giant structure to reveal nine giant rust-colored columns. Neuf Lignes Obliques or "nine leaning lines" symbolizes the nine valleys of the Country of Nice, which united with the rest of France in 1860. 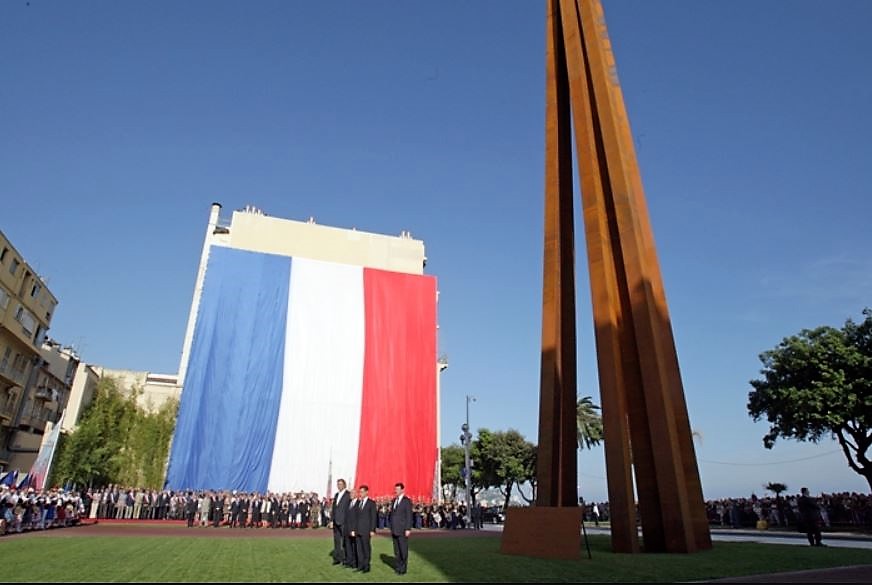 Media photo from Nice Cote Azur showing President Sarkozy, the Mayor of France, and other officials at the ceremony

The celebration was an interesting diversion during my third trip to Nice in as many months. Though I had wanted to experience a new country on my final trip in France, nothing could have topped being part of French history with Nice's celebration and my meeting President Sarkozy!

If you're planning a trip to Nice and wondering where to stay, I highly recommend the Hotel Suisse right on the water! 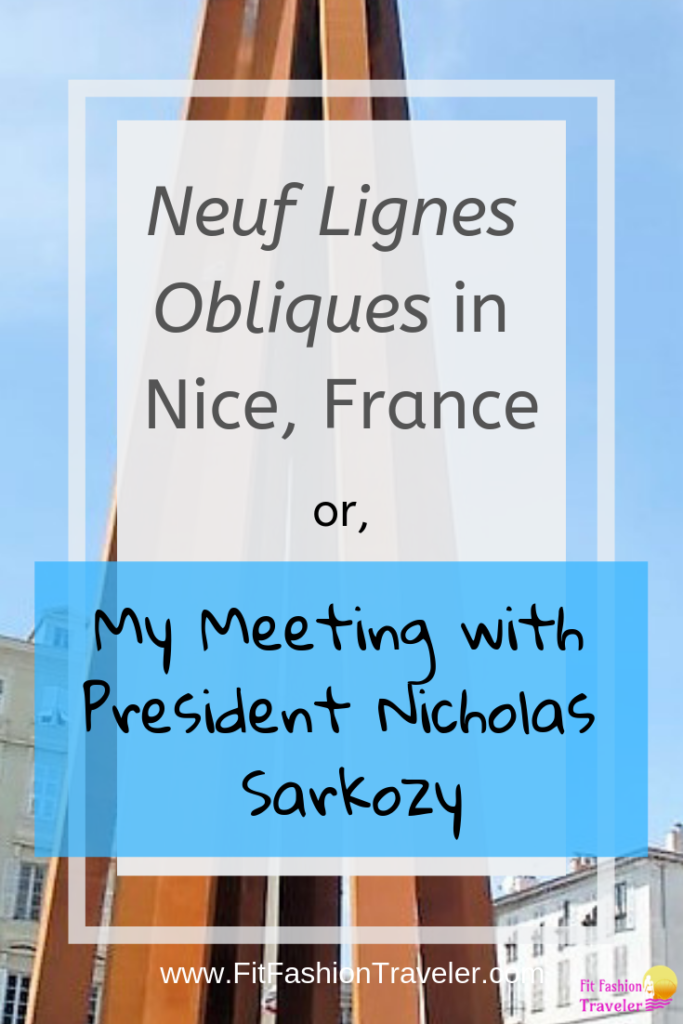